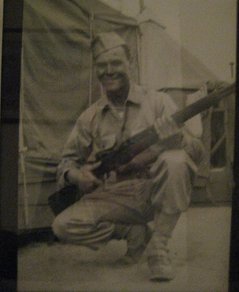 “On this Veterans Day, let us remember the service of our veterans, and let us renew our national promise to fulfill our sacred obligations to our veterans and their families who have sacrificed so much so that we can live free”  ~Dan Lipinski

I am deeply grateful to these brave men and women for their service. I would especially like to honor my father, Jake Harper, a true American hero who served in World War II, receiving three Bronze Stars and a special medal for D-day.

My dad was in the 121st Engineer Combat Battalion of the United States Army and battled in 3 major special series campaigns including D-Day where he was in the 2nd wave of American units to storm the beaches in Normandy.

He lost a lot of friends that day and there was extensive damage to their equipment but they persevered and the division went on to receive several awards for their performance during the invasion.

My sister took him to the National World War II Memorial in Washington, D.C. the weekend it opened in 2004 and he saw his name listed. It meant a lot to him, he told us it’s a weekend he’ll never forget. His name also appears on a tribute to WWII soldiers in a cemetery near Omaha Beach in France. I am very proud of my father. As you might imagine, he had some amazing stories. He passed away just last year, I miss him dearly.

Our service men and women and their families make great sacrifices. This country owes them a debt of gratitude.
These programs benefit veterans and active-duty soldiers:
Anysoldier.com, Wounded Warrior Project, Grace After Fire, VFW

“As we express our gratitude, we must never forget that the highest appreciation is not to utter words, but to live by them”  ~John Fitzgerald Kennedy