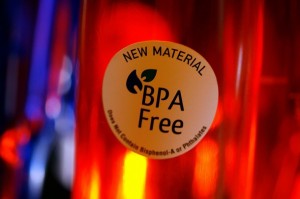 ARCADIA, CA – APRIL 16: Camelback brand water bottles hang on display at an outdoor supply store on April 16, 2008 in Arcadia, California. The Camelback brand are free of the controversial carbonate plastic bisphenol-a (BPA), one of the most widely used synthetic chemicals in industry. National Institutes of Health’s National Toxicology Program has concluded that the estrogen-like chemical in the plastic, which is also used in many baby products, beverage and food containers, and as linings in food cans, could be harmful to the development of children’s brains and reproductive organs, and Canada is reportedly about to declare health finding against BPA. Some makers of such bottles have recognized the concern, including Nalgene and Camelback, have begun producing BPA-free alternative containers. (Photo by David McNew/Getty Images)